Surgery on the nose and nostrils covers two groups of surgical interventions:

Cosmetic surgery whose purpose is to improve the aesthetic appearance.

We often find both circumstances in the same patient. Today nose surgery is considered holistically, so the ideal thing is that the surgeon treats the patient's problem, the functional as well as the aesthetic one, together in one surgical act.

Mostly, these are interventions aimed at correcting the deformation of the nasal septum (septoplasty), removal of nasal polyps, turbinate reduction, surgery for chronic sinusitis, etc..

Current techniques At present there are many innovative techniques that have contributed to the development and refinement of this kind of surgery. We use two techniques which represent important advantages for both patient and surgeon:

Endoscopic Sinus Surgery Using two thin endoscopes which are connected to microcameras, the surgeon is able to penetrate those zones of the nostrils and sinuses which were previously inaccessible or whose visualisation required aggressive entries, especially in case of sinusitis.

· Possibility to record the intervention on video

The radiofrequency scalpel is an equipment that uses a type of energy, the radiofrequency, that emits a lower temperature than the LASER and is more harmless and painless.

· The procedure is performed under local anesthesia and doesn't last more than 5 minutes.

Rhinoplasty is an elegant and sophisticated cosmetic procedure, both technical and artistic, which aims to improve the patient's facial aesthetics.

Currently the patient's satisfaction is very high due to the refinement of the surgical techniques during the last years.

Who can benefit from it?

Although mostly the patients are young people, we are able to obtain good results in patients who are older than 60 or 70 years.

What does it consist in?

The operation is performed under general anesthesia and requires a one-day hospitalisation Rhinoplasty is realised through the nostrils, using special instruments to sculpt and realign bones, cartilage and soft tissue in order to obtain a natural-looking nose that is in harmony with the other facial features.

Sometimes a tiny incision under the nose is necessary, that won't leave any scar.

And after the surgery?

Contrary to popular belief, the rhinoplasty is not a painful or very uncomfortable surgery. Due to refinement of new techniques, the swelling and bruising is less ostentatious.

The recuperation of respiration begins two days after removing the tamponade.

The plaster cast, which is placed over the nasal dorsum, is removed after 8-9 days. From that moment on, you can check the aesthetic improvement, although the final results don't occur until some time later.

Rhinoplasty Before and After 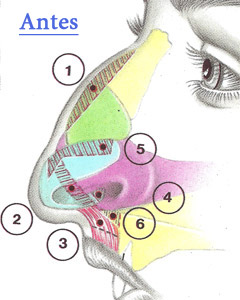 Do you need more info?